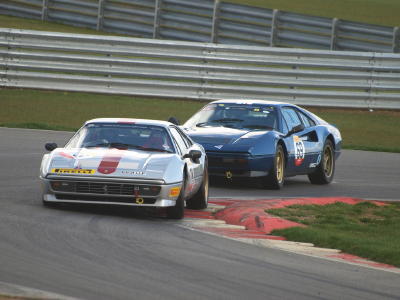 Snetterton Round 1 and 2  April 14th/15th 2012 - We have just arrived back from round 1 and 2 of the Pirelli Ferrari Formula Classic and Pirelli open at Snetterton.

We turned out in force with three Ferrari 328 GTB's.

Saturdays race was run on the recently extended 300 circuit and it was Danny Winstanley claming pole position from Jamie Cartwright a good 2 seconds clear followed by Wayne Marrs and Nigel Jenkins in there Group 4 Ferrari 328 GTB's.

Danny held his lead into the first corner with Jamie close behind and the remaining field just manage to avoid a spinning Wayne Marrs with many taking to the grass !

Jamie chased hard and the leading pair left the rest of field by a comfortable margin. Jamie was never able to close enough to challenge and Danny took the with Jamie a few seconds in arrears.

Sunday was the same story in qualifying this time on the shorter 200 circuit.

Although we had rain, hail and high winds the circuit was dry for the race at 3pm.  Jamie out braked Danny on the outside into the first corner and held the move to take the lead. Danny kept the pressure on constantly and on lap 4 regained the lead. Due to a leaky Ferrari 308 there was a trail of oil all of the way around the circuit making conditions very difficult. The remainder of the race was pretty much wheel to wheel with constant Challenging (with a little paint work being exchanged). Approaching the first corner of the final lap Danny locked up on the oil and flew off the circuit. He recovered very quickly but Jamie was well on his way by then. We would have enjoyed a closer finish but Jamie was overjoyed to cross the line victorious and exclaimed it was the best race he had ever had.

This will be a rivalry worth watching this season ! 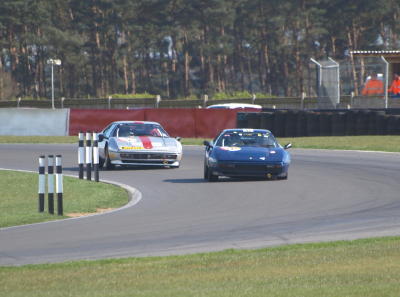 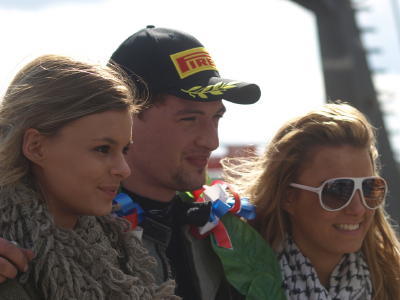 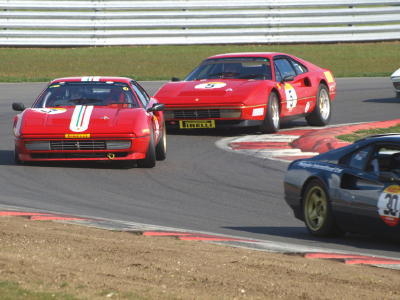