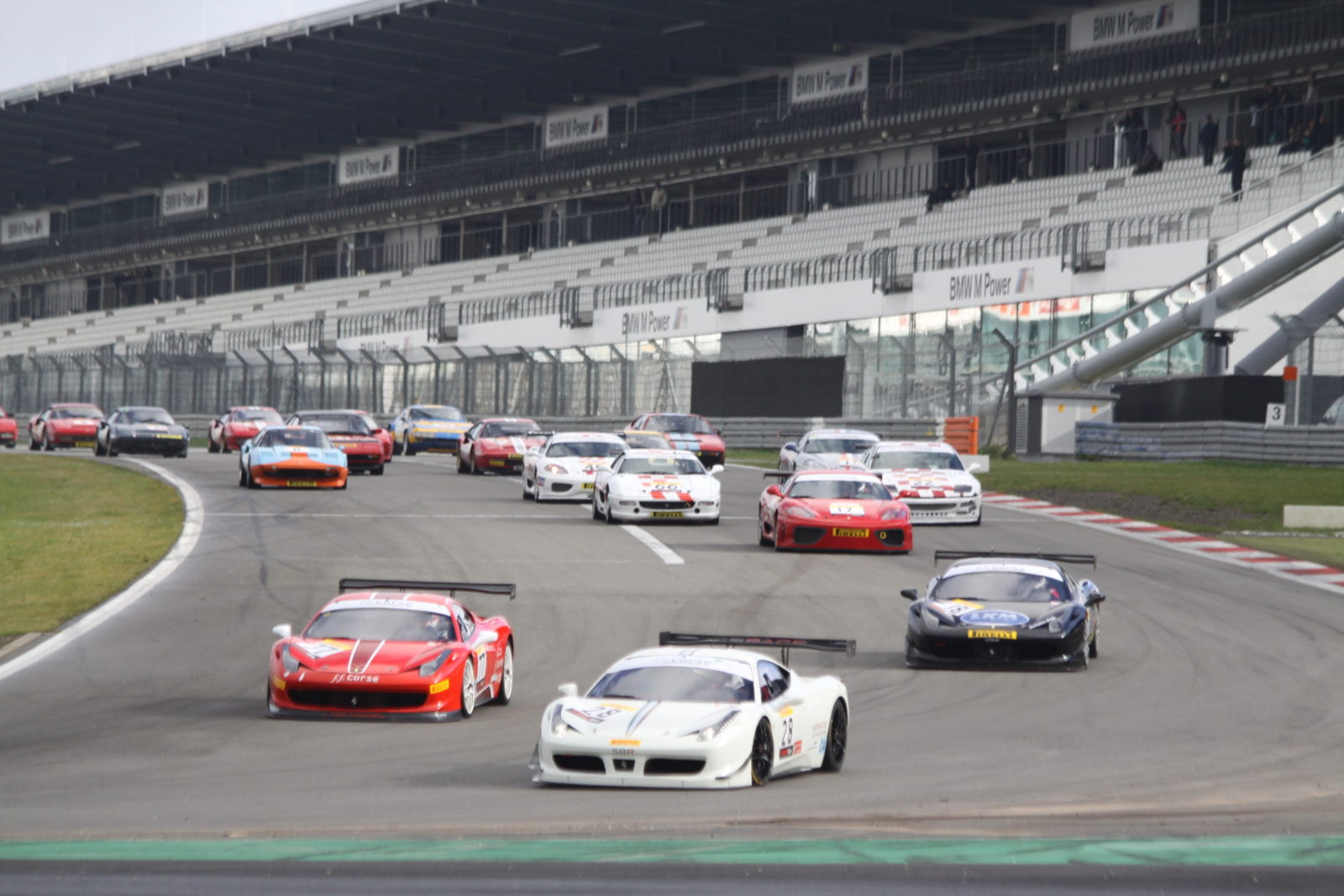 Unable to avoid the temptation of the last round of the Pirelli classic/Open series and first trip to the Nurburgring we decided to make the trip and headed off for the  Hull to Zebrugge Ferry.  Jamie C decided to retire his car for the last round (giving us all chance) and so it was Nick campaigning for group 4 honours and Ben C for group 3.

On arrival we were amazed by the sheers scale of the complex recently built around the GP circuit and the beauty of the surrounding area. A tour of the Nurburg Castle gave an amazing panoramic view of the Eifel region as well as a glimpse of the Nordschleife winding its way around the hills. The Nordschleife was every bit as amazing as we expected and we managed a few laps over the weekend in the tow vehicle. To drive with the commitment and confidence of some of the car that flew past must take years!

We took advantage of a couple of 30 minute  practice sessions on the Friday to prepare us for Qualifying first thing Saturday morning. Like Spa this venue seems to have very unpredictable weather and it helped that we had one session in the wet and one in the dry.

As with all of the overseas meeting the two series race together and an impressive array of 458 Challenge, 360 Challenge, 355 Challenge, 456, 328, 308, Mondial and a magnificent competizione 365 GTB/4 took to the track for our early qualifying slot. The lap times improved thanks to the practise sessions the day before and a dry-ish track.

It was an impressive sight as the pole sitting 458’s charged off as the lights went green in rolling start formation as race one got underway. The front running Classic series cars hung onto the back end of the Open cars as they got their slick tyres up to temperature. Pole sitter Dave Tomlin made a great start closely followed by Nick Talyor (Mondial T), Nigel Jenkins (328 GTB) and Ben C. Nick C was battling a little further back with Peter Fisk and Chris Butler in their 328 GTB’s. Ben C made a pass around the outside of Jenkins on turn 3 and set after the Mondial of Taylor. Tomlins super Fast 308 Fibreglass was just starting the inch away gradually inching away from Jenkins. Tomlin out braked himself and en C slipped around the outside of Taylor as they negotiated around the recovering Tomlin. Ben c had his mirrors full of

Jenkins Giallo GP4 328’s and he was soon past and in pursuit of Tomlin. Ben.C arrived at the scene of a once again recovering Tomlin which had given the lead to Jenkins. Jenkins crossed the line to take the win with Tomlin second and Ben.c 3rd. The Open race was won by Gary Eastwood in his 458 Challenge. The weather had certainly been on our side as 30 mins after our race black clouds rolled in and the heavens open. The conditions worsened through the day and the final race of the day a 3 hour endurance race looked hard work as the cars battled through foggy drizzle.

Things hadn’t improved much on Sunday morning which didn’t fill us with enthusiasm for  our  11.30 scheduled race. Luck was on our side again and when the race got underway the track had dried and sun shone. The grid order for race two was determined by the second fastest time qualifying.

The Classic didn’t get off to as clean a start as race 1 as the pole sitter Nick Taylor Spun in the first corner and was collected by Tomlins 308 damaging both cars but both were able to rejoin the race. Jenkins avoided this and was off into the lead followed by Tris Simpson in his 308 GT4, Peter Fisk in his 328 and Ben.C. Nick C didn’t make a great start and set about fighting his way through the pack. Jenkins pulled out a few seconds lead but Simpson who was driving out of his skin seemed to be reeling in the GP4 car for a few laps. Ben C passed Fisk into the final Chicane and set after the GT4. Simpson certainly took some passing and Ben.C was hopeful for a second place finish until Tomlin appeared in his mirrors and eventually reeled in and over took Ben.C. The rear end look somewhat misshapen after the accident and the rear lights looked comical as they dangled around on their wires ! Nicky C had driven a Stirling race and worked his way from the back upto 4th place. Jenkins crossed the line to take a double victory with Tomlin 2nd and Ben. C third. Paul Bailey was the overall winner in the Open in his 458 Challenge.

A great weekend racing to round off the year and we hope to return again to this fabulous venue. 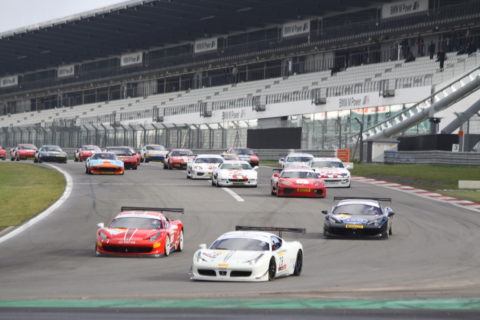 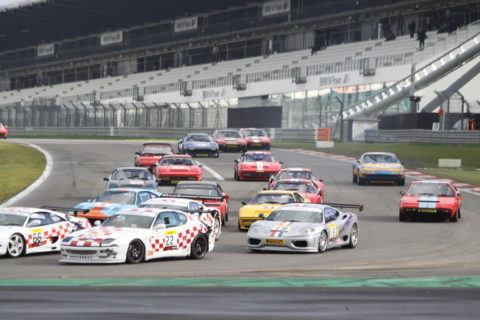 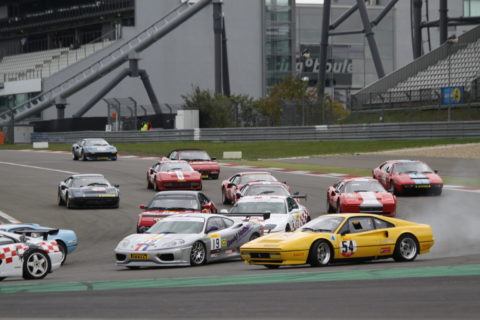 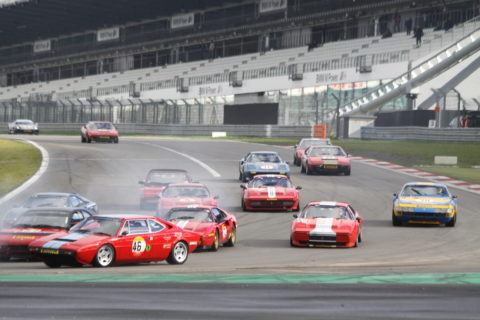 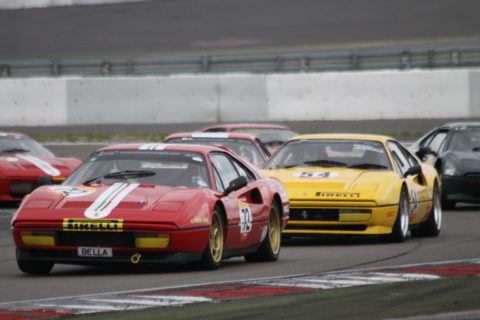 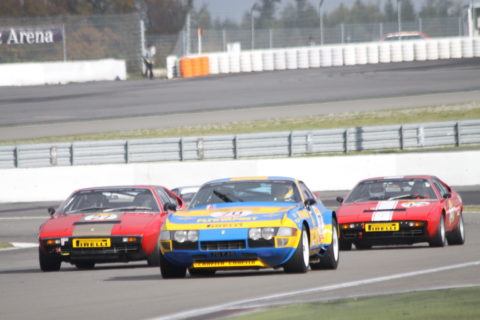 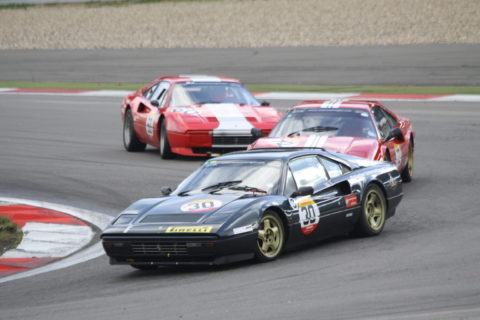 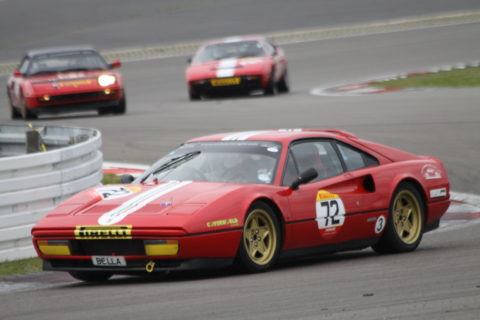