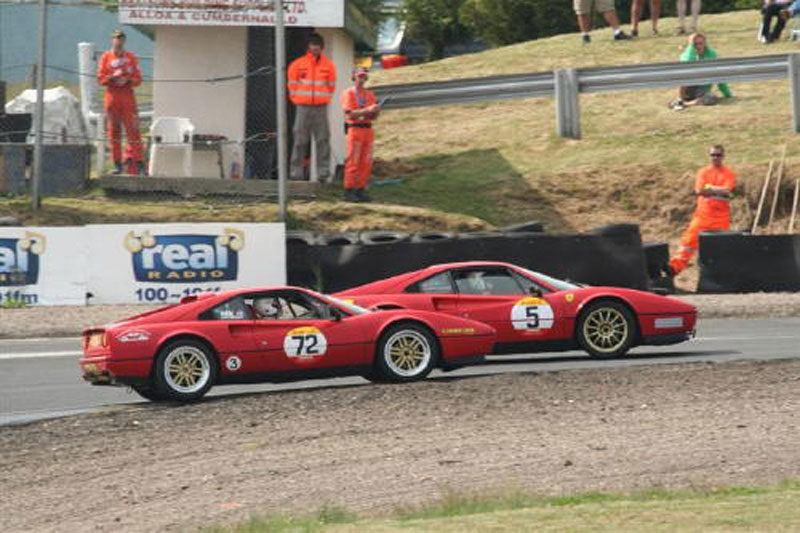 PFFC Knockhill 2010 review - It was good news tome that Knockhill was back on the calendar for 2010. On hearing great things from brother Ben about the circuit from when the series visited in 2008 it sounded like a real challenge, and it was with great anticipation that I set off on the long trip north.

The weather forecast was promising a good hot weekend, but as Knockhill has a reputation for having its own climate I kept an open mind as to whether we would have a dry race or not.

I was very impressed with the fantastic views and general settings of the paddock - it was a great change to have a marquee and it made for a very impressive sight to see all the Ferraris packed in. Simon Cooke and Derrick were not making a bad job of sorting us all out and helping us not crash into each other as we manoeuvred our cars into position. There was a great turn out of Ferrari GT4s in the paddock, and great to see Tris Simpson back in a classic Ferrari.

All looked to be going smoothly in the RND corner of the tent, Nick Whiticker`s car looking very impressive wearing its new blue and cream livery. It was great to see Chris Rea finally back with us after a long awaited return to the PFFC - he had been missed after suffering engine problems while having his car rebuilt over winter. It was a shame that William Morwood was missing, he was not feeling well and sadly had to give the weekend a miss.

Richard Allan was also present, evidently still buzzing from the previous weekend’s action at relatively nearby Doune Hillclimb. The number of classic cars on the grid I felt was slightly disappointing, just 13 of us would be competing. I would of imagined myself the cheap entry fees alone would entice people to make the long trip north to race at this fantastic circuit.

Most drivers opted to take advantage of the Fridays three 20-minute sessions to get to learn the circuit. Chris Rea was hampered again by apparent problems and his time on track was cut short in the hope that the car could be sorted and back out in qualifying the following day. Other than that all had seemed to go well and everybody was in high spirits as we left the circuit and headed for the hotel for the Friday night’s Ferrari dinner.

The weather was great for qualifying, and all was well as we headed out onto the track. After around 4 laps I could feel the track getting very slippery in certain places and decided to return to the paddock not wanting to risk running wide into the looming gravel traps. I ran trackside to enjoy watching the rest of the cars complete the session. I was amazed at how fast the cars looked as they came into view from behind the infield hill, front bumpers diving right down whilst braking hard for the hairpin.

The timing sheets were produced shortly after to reveal that Tomlin had put his super fast pace to good use, putting himself on pole, myself in second and Garry Culver in third.

There was a last minute decision to have two green flag laps so we could all get the tyres up to full temperature. This is always a good thing especially at knockhill where the track is so narrow, to make sure that we are all in control of our cars as much as possible on the opening lap. There was a little confusion when setting off for the flag laps in the fact that myself and Tomlin at the front of the grid couldn’t actually see any green flags - nothing a bit of screaming from the marshals couldn’t sort out and we were all on our way. The start/finish straight at Knock hill is over a crest so the further back down the grid you are, the steeper the incline to set off from making it harder to gain a place or two before you get to the first bend. Every one managed to get the cars through cleanly, apart from myself and Tomlin who battled for 1st place had a coming together causing David to spin off. Luckily no one else was collected and damage was minimal although David ended up at the back of the pack.

At the end of lap 1 all was going smoothly, myself heading the field, followed closely by Gary C with Chris Butler and Ben C not far behind with Fred Honour and Nick C fighting for position.

After 3 laps I was still managing to hold the lead from Gary but my car was feeling a little bit underpowerd and, on the only left hand corner of the track, at the bottom of Duffers dip, I was suffering huge oversteer. It became evident to me that my coming together on the first corner had caused a puncture and I had to retire to the pits, only to be followed a lap later by Gary who had suffered a problem with a faulty water pump. Meanwhile Ben was fighting hard to find a way past Butler. There was some good racing between the Ferrari GT4s, although Tris Simpson was having a few problems finding gears on his car. Martin Hart was in the middle and as usual putting in fast and consistent laps.

wheel so I could move my car out of the pit lane. It was a surprise to me to see Butler come back into the pits with a well-deserved 1st place, Ben C had stayed second and Tomlin had made a fantastic charge back up the pack to take 3rd, also setting fastest lap, with. Nick Cartwright just 2 tenths of a second behind. Fred Honour took a Grp 2 win and Nick Wittaker taking grp 1 honours.

The second race for me went a little better, especially with the revised grid positions. These were set with the second fastest lap time of each driver`s qualifying laps rather than the end position of race one.

Although this did upset a few, Gary and myself weren’t seen to be complaining as we were retrospectively 1st and 2nd with Tomlin in 3rd and Ben C in 4th. Looking at the times, that took us to the grid positions, there was less than a second between the

four front starters, so the chances were it would be an eventful race.

Second time round saw us all get off to a clean start and I made it to turn one first followed by Ben C making up two places off the start with Tomlin, Culver and Butler in hot pursuit. My job during the race from then on was to simply hold my lead, which was easy until the last 6 or so laps, as Gary managed to get past Ben C and eat up the lead that I had made in an awesome charge. I crossed the finish line a few tenths ahead of Gary to take a very satisfying victory. Nick Cartwright and Fred Honour enjoyed a fantastic battle for 6th place

Overall one of my favourite racing weekends yet - we were lucky the weather stayed good for us. Also I found the locals were very hospitable and the management at the track were very friendly. The elevation changes at Knockhill are what really make it such a great circuit for me. They are a Fantastic feature to this small, narrow but flowing circuit and I hope the series visits again next year. 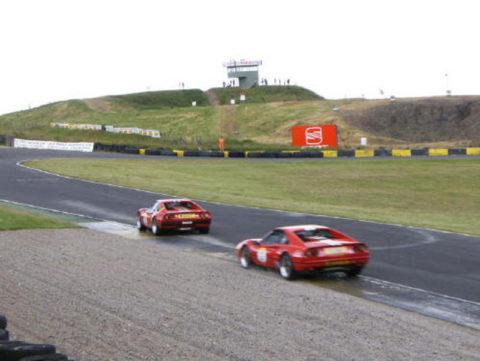 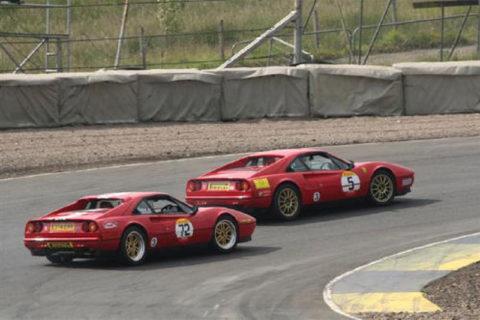 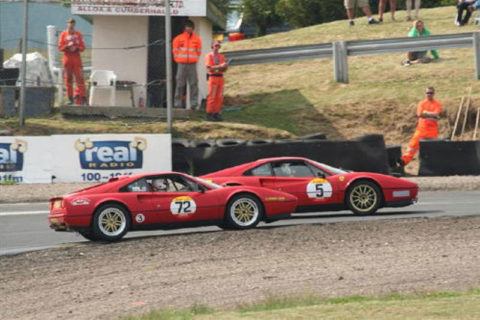 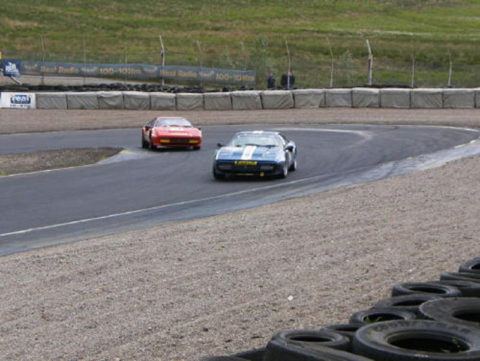